Out of Home advertising is dragging its heels compared to other digital channels in the creative stakes. JAMIE SNOW explains why the presence of media owners and the expansion of digital capabilities should be our top priorities.

Jamie Snow is Head of Design at LUMO Digital Outdoor. 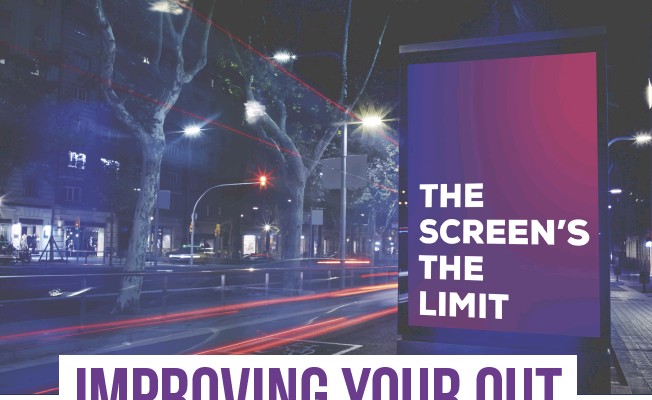 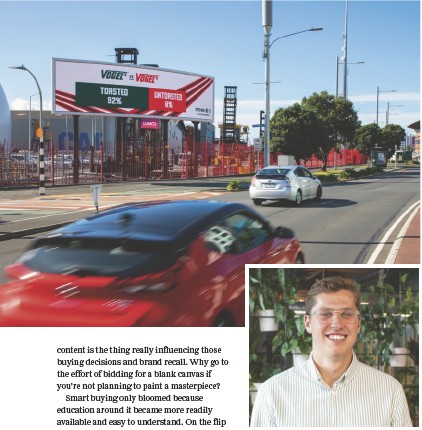 The Head of Design at LUMO Digital Outdoor discusses what needs to be top priority to make digital out of home advertising shine. Aclient asked us recently if we’d be able to set a billboard on fire for their next campaign. Unfortunately, we told them, setting a million-dollar LED screen alight was outside the realms of possibility. Equally unfortunate though is that big, memorable ideas like this – even when unworkable – are the exception rather than the rule in the digital out of home (DOOH) space. To get the most out of a not-yet-entirelymature channel like DOOH, there are a few important considerations. And I’d argue that having media owners present during the creative briefing process is top of the list. First and foremost, our presence allows us the chance to assist agencies in helping to craft ideas formulated for all channels. I’m talking ideas big enough to make an impact, yet not completely out of scope (or dangerously flammable). And if you’re uncertain about the capabilities of a channel, let’s be honest, you’re unlikely to think creatively about how you can best use it. By bringing media owners in as consultants for a campaign earlier in the process you will benefit from their knowledge and inspire diversity of thought. Only then are you really giving your campaigns a chance to shine. BIDDING ON CREATIVITY We’ve seen a rise in demand for programmatic trading across DOOH because clients are now buying a lot smarter. Why is this relevant? Because if companies are going the extra mile to buy smarter, they should also show the same savviness when it comes to the creative on screen. Sure, programmatic trading means you can target your audience in a better way, but your content is the thing really influencing those buying decisions and brand recall. Why go to the effort of bidding for a blank canvas if you’re not planning to paint a masterpiece? Smart buying only bloomed because education around it became more readily available and easy to understand. On the flip side, we can attribute the lack of creativity to the limited knowledge of how things work. Most clients see DOOH as cheaper classic boards. They think only a JPEG file is usable, and therefore confine themselves to what is basically a static image on a LED screen. But many people don’t realise you can pull in live feeds from websites and update the creative based on different times of the day. Not to mention serve dynamic content that is influenced by the temperature or weather condition. And those are just the baseline capabilities. Media agency MBM, for example, decided to do things a little differently with its latest DOOH campaign for bread brand Vogel’s, and quizzed OOH audiences on how they enjoy the iconic loaf. The creative designed by DDB was simple, but the addition of audience interaction rarely seen across DOOH made this campaign stand out. MBM and DDB brought us into the creative process early, and we were able to help formulate an idea for our LED screens that ultimately saw over 15,000 Kiwis get involved with the campaign in the first seven days. By bringing channel owners in at the tail end of the briefing stage, you are limiting your creative to images and a tagline. Too often we are being funnelled in at the last minute in a desperate attempt to revitalise something that wasn’t made with DOOH in mind. LIGHT IT UP Along with setting fire to our screens, there is one more limitation in New Zealand in need of addressing at present, and that is animation across creative. Despite concerted efforts, we are somewhat limited here due to animation being unconsented by the New Zealand Councils regulations across LED screens, owing to their placement near busy roads. Many international examples, however, show the intense creativity that DOOH can have, especially with the use of moving imagery and illusions. Look at Piccadilly Circus in London. The large curvature of the screens and clever content design means campaigns seem to be coming out of nearby buildings. It’s worth noting work from Amazon Prime and separately Balenciaga x Fortnite, which both used the LED screen in the heart of London to do something not often seen across DOOH. Animated billboards will be an exciting development for the channel, yet in the meantime there are plenty of creative options to explore. Some of the best campaigns we see are simple: bright, high contrast and funny, grabbing people’s attention as much as Piccadilly Circus’s screens do. Pull up a seat, command the room. In 2012, online celebrity mentorship series, Masterclass, was introduced and in its first four months sold 30,000 subscriptions. During the pandemic at-home learning boom, that number grew by 1000 percent in three weeks. The reason Masterclass was so successful was because we could finally learn from the world’s leading experts. Why not get Serena Williams to teach you how to play tennis? Or Gordon Ramsey to teach you how to cook?