AA Smartfuel has beaten out Countdown Onecard and Flybuys in the ranking of New Zealand loyalty programmes.

The ranking is produced by the 2021 For Love or Money consumer research study, which surveyed 1000 New Zealanders in the first quarter of 2021 about their attitudes towards loyalty programmes. Commissioned by customer loyalty consultancy The Point of Loyalty, this is the second New Zealand For Love or Money study. The first was conducted in 2019. “It’s interesting to see how loyalty programme popularity has changed in New Zealand since the first study in 2019,” says The Point of Loyalty Chief Executive Adam Posner. “Programmes appear to be winning the hearts of the nation.” Adam says that New Zealand’s loyalty programmes are progressing. “The report shows that loyalty programmes are improving, with 67 percent of members saying they’ve improved in recent years, specifically in the earn rate of rewards and their use of technology, with 42 percent of members indicating programmes have improved in this area.” Although AA Smartfuel’s programme remains number one in 2021, there has been a decline since 2019 in members voting that it’s ‘doing a very good job’. Flybuys’ programme has improved in terms of members deeming it to be ‘doing a very good job’ (11.1 percent in 2019 to 12.3 percent in 2021), but it’s Countdown Onecard that has jumped to second in the rankings, with an increase in members responding that the programme is ‘doing a very good job’, from 10.6 percent in 2019 to 14 percent in 2021. Other highlights of the report include: • Kiwis love loyalty programmes. New Zealand consumers over the age of 18 are enrolled in an average of 4.8 programmes (in 2019, the average was 4.7). • Gen Z loves these programmes even more. Younger consumers under the age of 24 (Gen Z) are, on average, enrolled in 5.4 programmes in 2021 (up from 4.9 in 2019). Fourteen percent of Gen Z consumers are enrolled in 10 or more programmes. For more on this, Nzmarketing and Toluna surveyed members of the public on loyalty programmes and how they’re navigating consumer concern around data security and privacy. Brand loyalty may be less of a myth and more of a must for Kiwi consumers. They shared with NZ MARKETING and TOLUNA why loyalty programmes matter most to them, where they find value in subscribing to them and what they believe some of the shortcomings are*. Ninety-two percent of respondents are members of at least one loyalty programme (Countdown’s One Card and Flybuys are the most popular) with an even mix of reasoning between short-term and long-term benefit expectations. Most (52 percent) don’t ever shop around for better benefits once they’ve joined a loyalty programme. Seventy percent feel they’re getting some value/benefits (to a moderate to large extent) from their loyalty programme. Most prefer rewards either in the form of cash rebates (45 percent) or points (42 percent) that they can redeem later for a products or service, with only 14 percent being after exclusive members’ offers. Loyalty programmes that are fee free stand a better chance of attracting members – 76 percent of respondents said they’d likely join such programmes, while only 3 percent are willing to pay and 11 percent may consider paying for a loyalty programme membership. However, the majority (53 percent) don’t feel that they’re getting properly recognised for all the data they’re sharing – such as their shopping habits – stating little or no recognition. For the full set of results, visit nzmarketingmag.co.nz/toluna-loyalty-survey. And for more on how Toluna Start can help you collect better customer insights, visit tolunacorporate.com/product/toluna-start * 540 Nat Rep sample NZ ( field work over three days using Toluna Start in the week commencing August 9). 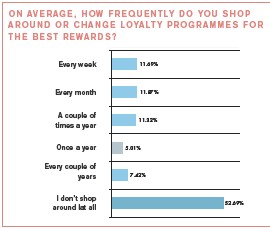